This is the third of a series of guest posts and dialogues around the question:   How does Whiteness Separate us from God?

The Mennonite seminary where I attend as a student has relatively few pieces of art depicting the person of Jesus.  In one of the prayer rooms, there is a reprint of an ancient icon of a brown-ish Jesus.  This is the only image of Jesus in the areas accessed regularly by the public.

But, as you descend into the lower level of the seminary, back in the corner of the building where there are no windows, there is a room set aside for the student study.  The room is full of little cubicles, musty biblical encyclopedias from the 1940s, and a few choice pieces of art.  On one wall, four portraits of white men are lined up next to each other – Felix Mantz, Conrad Grebel, and George Blaurock, representing “proper” Mennonite heritage.  And, finally, Charles Wesley is the fourth portrait, as a reminder that we’ve got a bunch of Methodist students around, too.  On another wall, three pastel-y pictures portray classic, mid-20th century Sunday School images of Jesus. 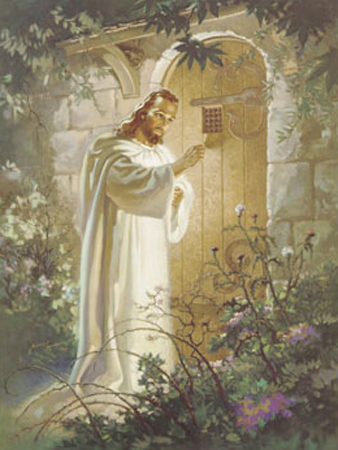 The seminary provides a metaphor for how I see white Mennonites separating ourselves from God.  On the surface, in the public areas, we exude an openness to world expressions of the face of Christ.  We display our one Greek Orthodox icon because if we’re going to have an image of Christ (which we have long called idolatry) out in public, it needs to show that we are world-savvy about the multiple expressions of Christ.

But when you enter the depths, the spaces where we form our identities, we tolerate a white Christianity because, at the core, we see Jesus as white.  And, as long as that stays hidden as we accommodate personal tolerance to that “Truth,” we are caught like a frog in the hot water that boils around us, the heat turned up while we weren’t paying attention.*  White Patriarchal Christianity subtly reinforces that we are dependent on it, not just through art, but through curriculum which is still dominated by western, white male academics.  Of the assigned reading in any semester that I’ve been a student at this seminary, a gross majority of the books have been authored by white men.  And so, white Christianity is reinforced, even when it is not intended.

When Amanda asked me to be a guest blogger on this series, the question “How does whiteness separate you from God” showed a leniency in my own awareness of my complicity as a white seminarian in a white Mennonite Institution.  So the following observations – on Whiteness, Separation, and God — I name from my experience.

Whiteness  Whiteness is my inescapable context.  I was born with white skin in a culture that historically has championed a particular skin tone, a particular definition of “civilization” and “religion” and “enlightenment,” ­a preference for a particular hierarchy, and a particular structure to reinforce all of this.  I take this socialization wherever I go, and in various situations, particularly where imperialist globalization has gone before me, it gives me particular power.  I wish I could relinquish my Whiteness, and parts of it I can, though to do so means I am necessarily deprived of privileges I once enjoyed.  This leads me to the next observation.

Separate  First, I note the word “separate” in this question is used as a verb.  Whiteness works to physically, emotionally, spiritually, socially, etc. distance us from God.  Whiteness widens the gap, luring us away from God.  Thus, a response to the separation between God and myself is necessarily a reaction to my Whiteness.  The first thing I am invited to do is be aware that the water is heating up around me.  Before I can react, I need to acknowledge that Whiteness is the primary actor in the first place.  Where many white Mennonites get stuck is at this point:  we can acknowledge that structurally-enforced Whiteness separates us from God and from Neighbor.  Is that enough?

While this stance has long assuaged our guilt, now is the chance to react against our separation.  In the Christian world, we have this notion of metanoia, which can be translated a variety of ways from its ancient Greek origins.  It can mean a change of mind, repentance, or an inner change.  There are opportunities or turning points from which we are invited to pivot.  I can say over and over that I am sorry for the way Whiteness destroys people and the planet, but it means nothing if I do not change.  If awareness produces acknowledgment, apology produces change. 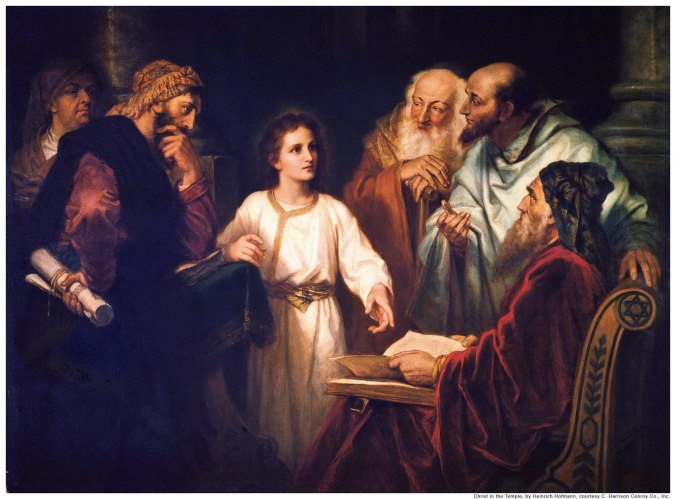 Hofmann – “The Boy Jesus in the Temple”

God  Christianity has a history of claiming that we are set apart, “wheat” separated from the “chaff” for God’s purposes and God’s glory.  A chosen nation, a “city on a hill.”  Let me be clear here:  White Christianity is not Separate because God has chosen Us; it is separate because we have made for ourselves a white God in our image, who reinforces our supremacy. For me, this truth-telling and reaction is grounded in a belief in a God, who is Essence, Event, and Energy.**  It is also what I – and all other white people – are separated from.  If we have created a white god to worship, how does that inform our interpretation of the Two Greatest Commandments, which Jesus outlines as the basis for faithful living?

Love the Lord your God with all your heart, mind, and soul.  I don’t get to name God, what God prefers, or how God orders or disorders the cosmos.  God is “mine” because I have named the gulf I have created/inherited that separates me from God, which is my own investment in structures of patriarchy and oppression.  The process of faithful engagement is to continue naming the gulf between self or community and God, because the prevailing forces of whiteness are so strong.  If my experience of God is one that reinforces the privilege I have because I am white, I’ve missed the point.

Love your neighbor as yourself.  As Amanda mentioned in her post on this, we do not get to name which people, which creatures do or don’t have Essence, Event, Energy.  Whiteness prefers to craftily challenge that, creating a hierarchy in which white is the only true holder of the Divine, and those are the only neighbors we love.  But have you noticed that perfect love drives out Whiteness?

Love notices that our neighbor is not our clone.  (Things Jesus didn’t say: “Love your clone as yourself.”)  The more difficult thing to do as white people is to relinquish who one must be in order to be worthy of love.  I have a terrible history of picking and choosing who I think deserves my love, and in no small way does that reflect my complicit ownership of white privilege.  In this way, I turn love into a currency, and I have inherited the power to choose where to spend my love (for the best return on investment.)

At the end of this all, who am I as a white lady seminarian in a white Mennonite institution?  There are some things I can name:  for too long, I’ve been uncritical of the books I let inform me within academia; for too long, I’ve supported patriarchal ethics that have not only ignored gender norms but racist norms as well; and for too long, I’ve not noticed how privilege itself has gotten me to this point, well on my way to a master’s degree.  Like the seminary, these are the public areas of my identity that “exude an openness” to reflect on how I’m complicit in Whiteness.

But there is a host of things I struggle to name, particularly as I’ve moved back “home” to my white, Mennonite family in a largely white, Mennonite area.  Without even trying, I can easily settle into a rural, white idyll, seeing only white friends and family while rolling my eyes at the neighbors with confederate flags.  And spiritually, my whiteness here in the Shenandoah Valley means I don’t necessarily “need” God, because this is the location in which my white privilege is at its height and breadth.  I can become my own little god because my white social networks effortlessly reinforce my blindness to my ingrained racism. 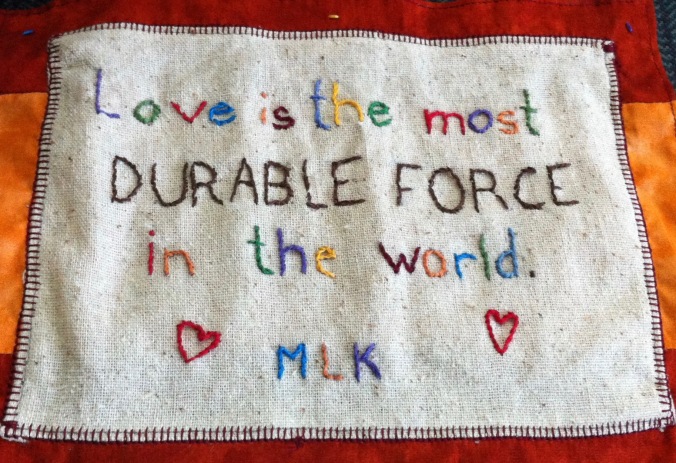 Yet, I sense that God is calling me out of my whiteness and into my utter humanity here at home.  And I find that call is beyond frightening.  The last thing I want is to be vulnerable, because “God forbid” I get uncomfortable (and discomfort is chaos for white Mennonites.)  I wonder if “home” is where I will do my best work, and if so, I have a lurking suspicion this is where the work will be the hardest.  I balk at the discomfort, the tireless work, and having to speak up.  I balk at my whiteness, and I’m frightened of what God will say to me when I finally turn back to close the gulf.

*I’m aware this frog-in-boiling-water thing has been scientifically debunked.  So, let’s embrace it as a literary metaphor.

**Essence, as in a similar concept to Amanda’s expression in her post, regarding Quaker and Christian Animism ideas that God’s Spirit is present in all things.  Event, as this intangible idea suggested by John D. Caputo, in which God is revealed yet still being revealed, and that process itself is what we call God.  Energy, as similar to Essence in that the Divine animates the universe.  All are esoteric and incomplete, yet deeply personal and communal.

Valerie is a Masters of Divinity candidate at Eastern Mennonite Seminary, and a part-time pastor at Shalom Mennonite Congregation.  In her spare time, she gardens, drinks coffee, and is currently catching up on The Americans.

This is the third of a series of guest posts and dialogues around the question:   How does Whiteness Separate us from God?
For this exploration, a collective of critically thinking and courageous individuals – all of whom identify as white and have had experience being socialized as girls and/or women – have agreed to share their thoughts, experiences, and expertise. You can read the first and second in the series here and here.