With all the talk of gun control and gun rights, mental illness and toxic masculinity, (school) safety and (home-land) security, there is a glaring omission. Like the elephant in the room, whiteness is wreaking havoc and doing exactly what you would expect a six ton creature to do inside 400 enclosed square feet. While the debate centers on background checks and semi-automatics and access to firearms, White Supremacy is cleverly going about his business, systematically taking children’s lives and convincing us of our faultlessness and helplessness to do anything about it.

(I originally sat down to write this post on the privilege of white folks to run, hide, and dip out of this work when it gets difficult, emotional, personal, and “real”. But now in the wake of (more) children killing children, I am writing about both because everything is connected.)

His & Hers, by Amanda K Gross

Guns were some of whiteness’s earliest recruits. Having achieved marked success with over five millennia of weaponry development and a culture of power-over above all else, European Patriarchy consummated its deal with the (white) devil in colonial law by saying who could own and carry firearms (white people) and who could not (people of African descent and members of Native tribes). Around the same time colonial law was also weighing in on the bedroom and sexual assault, making marriages between white people and non-white people illegal – although really only enforcing this in the case of white women – placing the center of patriarchal power tightly in the hands of white men while giving them the ammunition to carry it out, no matter their social status or class.

The elephant in the room is doing precisely what it was designed to do (no offense to elephants or rooms).

The (white) gunmen are doing exactly what they were raised to do. Or, more accurately exactly what we raised them to do. We are the mothers and aunts who bought them toy weapons as children, bought them violent video games, and took them to see action films. We are the parents and grandparents who told them to toughen up and take it like a man and be a competitor. We are the friends and siblings and bullies who beat them into a pulp for not being (strong, brave, smart, big, fearless) enough and made fun of them for their tears. Those are our babies with the guns and the gun wounds. Their state of mind is a reflection of our own state, the violence of white masculinity and white culture that proclaims value and worth and material reward and holiness and heaven for a select few at the cost of us all. 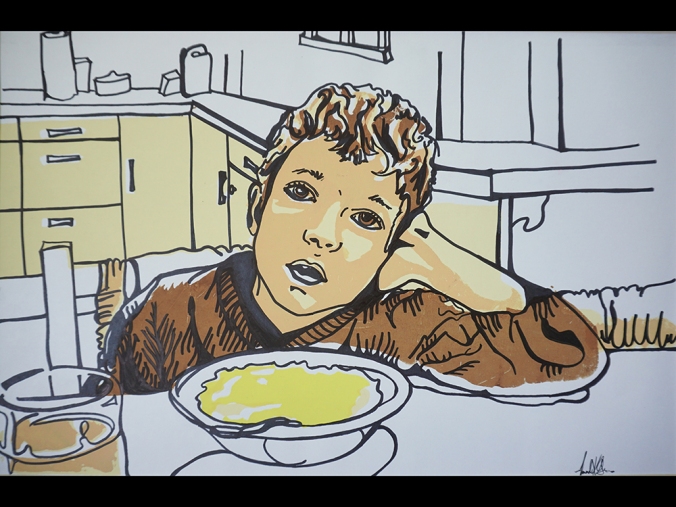 We are deceived if we think a few gun control policies will save us now. At best, it serves as a band-aid*. Believe me, because I know a thing about or two about band-aids. They are my current artistic medium of choice.

Of course whiteness is killing many children, not just the ones who have come to be called white. Nonwhite children – Black children, Native children, Latinx children, Asian and Pacific Islander children are on the front lines with casualties at higher rates in every category from infant mortality to health outcomes to education and housing.** But the irony is that whiteness and systemic white supremacy is toxic for white children, too. And not just the poor ones. White privileged children are increasingly brought up in ways that result …“in entitled, depressed, addicted and, most recently, narcissistic kids. Their despair manifests in a wide range of self-destructive behaviors: drugs; alcohol; food (stuffing or starving); self-mutilation (cutting, piercing); Internet addictions to gaming, chatting and pornography.” They are also shooting up schools and being shot in schools. I point this out not to center the victimization of white children as more important, more severe, or more significant than the oppression and victimization of other children – it’s clearly not, not on statistical nor moral grounds – but I do so to emphasize a point. If white supremacy (think: systematic racism) harms white children, then why are even the most overt racists among us in support?

For those of us white people not loudly proclaiming overt white supremacy (which I assume is most of you who read this blog), we have a lot of soul searching to do. Our white liberal duck and cover strategies have been upholding white supremacy too. We may say that we abhor racism, yet we send our white children to that better whiter school. We may vote for gun control, but we invest in home security systems just in case. We may praise integration and diversity, though our homes, neighborhoods, and congregations remain lily-white. We may say we’re anti-racist, but when the going gets tough, we peace out. We could write a book, and many of us have written many books, rationalizing these contradictions inherent to the systems we’ve created and daily maintain.

This Land is White Land, by Amanda K Gross

Sometimes the grocery store aisle is overwhelming. Also sitting in a chair and trying to come up with one silver bullet (pun intended) for solving gun violence. Sitting and thinking with the expectations of solving the world’s problems is a highly intellectualized and distanced saviory approach that I have often used, a result of my socialization into the class of educated whiteness. It is also incredibly demoralizing and overwhelming. No wonder so many of my peers have opted for comfortable self-aggrandizing distractions like armchair quarterbacking, social media, the non-profit industrial complex, and yummy food ( which reminds me, I think there’s chocolate in my fridge…), rather than the ugly, messy, scary unknown of struggling together.***

This week I was part of a sweaty conversation (we were all nervous) about struggling together. The elder in the room used a sports analogy which I appreciated because I was raised by a jock. There’s a difference between being on the court and in the stands. The privilege of whiteness affords white people the option of our distance and positioning in the struggle. The privilege of whiteness allows us to opt out in times of emotional distress or personal tragedy, to sit on the bench when we need a minute or retire and follow the team at home. But let’s be honest with ourselves. When we access that privilege, we are reinforcing white supremacy just the same as our overtly racist cousins and their flags of hate. 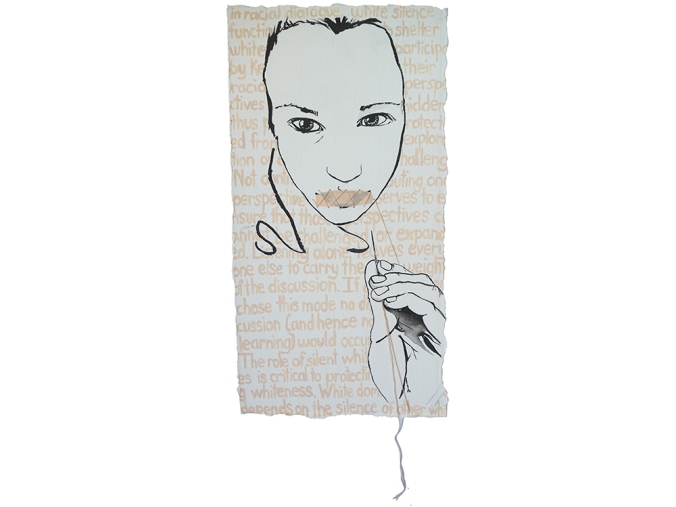 As a white person who has opted out in the past and still has many moments, I understand the urge to duck and cover. As a manifestation of Post-Traumatic Mistress/Master Syndrome, running and hiding has served us well. It has preserved life and preserved privilege.****

As a white person who does this work from relative comfort, normalizing the intensity and hardness and challenging nature is a point of growth for me and so is developing a practice of resilience. In many ways this is a new type of fight for the white ladies – one that involves being fully present, showing up on my good hair days and my bad, getting nastily sweaty in public, and airing out all my dirty laundry. But in other ways it is a fight that is familiar. We have resistance traditions to draw from even as we re-narrate our own.

We are powerful in our ducking out, but we are also powerful in the practice of our opting in. The impact of our choices reverberate. We think we are small and insignificant. We have been socialized to think that our showing up  – not just physically, but consistently being emotionally present – doesn’t matter. We give away our power. Alone in our little corner of the world we begin to feel weak and overwhelmed. We let ourselves be carried away in the white supremacist river of apathy. Individualism has conditioned us to prefer the peaceful float of loneliness rather than to struggle against the tide as a group. And each time we choose to leave, we take our toys and our joys and our value and our networks with us. Even in knowing this, we often regret but don’t act, allowing the embarrassment, shame, and guilt of our egos to block ourselves from the possibility of redemption.

I am writing this post for those who run and I am writing this post for myself, because I want us to be clear and honest about the consequences on those we leave and where we land. We leave a hole that only we can fill and where we land there is also the impact of us. Like the boats that unloaded my ancestors to Philadelphia and its surrounding counties, our leaving impacts the humans where we choose to settle. When we flee, we may only be aware of what we are trying to get away from, never noticing who we are trampling in our flight. 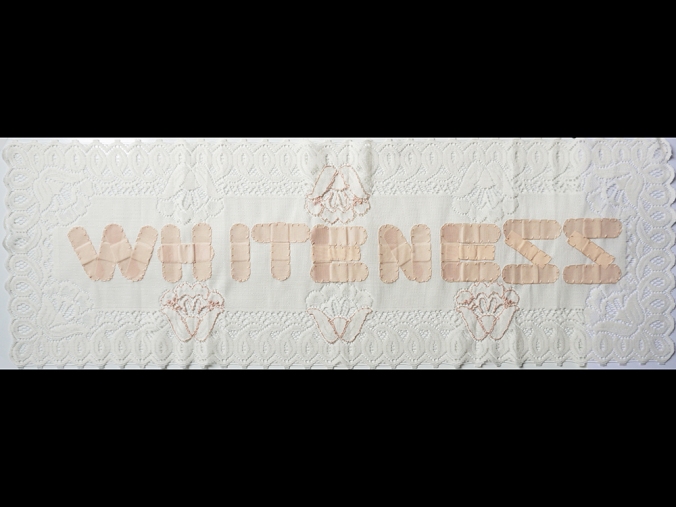 Choice is an interesting concept especially paired with other words like free will, and self-determination, and independence, and interdependence, and liberty, and privilege, and DNA, and socialization, and God, and liberation, and colonization. The choice to decide. The privilege to choose. The option to stay in it or to flee. The discernment to know the difference. Today I am convinced that our power is in the (re)commitment to stay and struggle in the fire. That is how we will keep all of the children alive.

** Here are some Pittsburgh stats, but overall the racial disparities are consistent across the U.S.

***I learned about the agreement to Struggle Together from the People’s Institute for Survival and Beyond’s Undoing Racism Training. Please find out when one is coming to your area and attend!

**** My family has been running since the 1500s when Switzerland decided Anabaptism wasn’t its thing. And when running wasn’t an option, we practiced hiding, often in caves. This one-two combo is a natural trauma response which well-suited a people with a peace teaching. It also translated effortlessly (or so it seems) to the project of colonization underway on the global scene. And so our running and hiding which served us as forms of resistance in Europe underwent a baptism of whiteness on the shores of what is now called the United States and has been reinforcing our white privilege ever since.

One thought on “How Whiteness Kills White Children, Our Duck and Cover Strategies Do Too and What We Can Do About It”